My House on Wheels 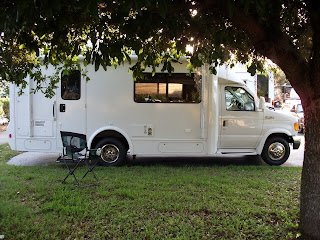 April 2011, parked at Lazy Days RV Center in Seffner, FL
In April of 2011, I found "the one" (in an ad on the internet), the perfect RV for me. Only one slight problem, it was in Florida and I was in Chicago. I had never driven an RV before. I had been going out RV shopping, but I never did a test drive.

I decided to go ahead adn make a call about this RV. Usually when I would find an RV that I liked on the internet, I would make a note of the website and the details.  I never made a call on these other RV's because I did not want the salesperson calling and bugging me.

This time it was different, I wanted this RV.  It had a lot of the features that I liked, and was missing the items that I did not want. I talked to Greg at Lazy Days RV Center in Seffner, FL. He gave me some details and a price.  I called him back a few times with more questions, and he emailed some videos of the interior and took some measurements of things for me.  I decided to go ahead and make a $500 deposit over the phone.  He said it was refundable if I changed my mind.

This RV had an unusual floor plan, it was custom made as a traveling office for an insurance company. Lazy Days had originally sold a fleet of them to this business.  I don't know why the insurance company did not keep them. It had only 7,000 miles on it, almost brand new. 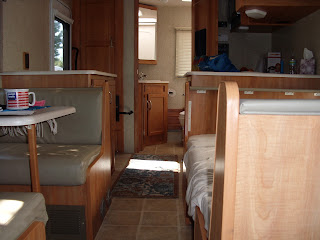 Lazy Days had to install a shower, there was a cabinet in the place where the shower should be.  The rest of the bathroom fixtures were already in place.  This RV has a kitchen area with a refrigerator (very small) and a microwave/convection oven.  There is not a stove top or a kitchen sink - this was ok with me.  I did not want a stove top, and 2 sinks in such a small space seemed to be unnecessary.  I don't cook a lot, I eat mostly fruits and vegetables. If I want something cooked, I can go to a restaurant.

There were 2 dinette tables. The larger one was folded down and I added a twin mattress to create a couch/bed.  The smaller dinette will eventually be changed into a desk and chair. 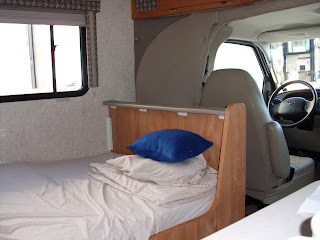 in Florida, getting ready for the drive back to Chicago
We set a date for about a month later for me to pick up the RV in Florida.  After a few days, I decided I could not wait that long, I called and said I wanted to pick it up sooner. They had to move me up on the list for the service department to get the work done.

I went to Florida to pick it up, I arrived before it was finished.  I visited with a friend and did some sightseeing and took some classes at the RV center.  Lazy Days also offers a free Driver Confidence Driving Class, I attended this class on the morning I was leaving to drive back to Chicago.

Lazy Days RV Center is the best place for a first time RV owner. They offer classes and extra services.
They now have a 2nd location in Tucson, AZ.  I am hoping to go to Tucson to have some interior remodeling done on my RV.