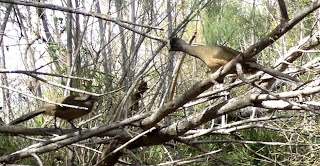 "hiding" in the trees as I approached

"The Plain Chachalaca (Ortalis vetula) typically occurs in small groups of 3-5 individuals in tall, thorny thickets, scrubland, and second-growth forest edge along the Gulf-Caribbean slope from the Lower Rio Grande Valley of Texas and Nuevo Leon, Mexico south to Honduras and Costa Rica. This native, non-migratory gamebird is similar in size and form to a female Ring-necked Pheasant (Phasianus colchicus) and is named for the raucous, ear-splitting chorus a flock makes. The loud cha-cha-lac-a call is most commonly heard during the morning hours, and increases considerably during the February-March breeding season. " 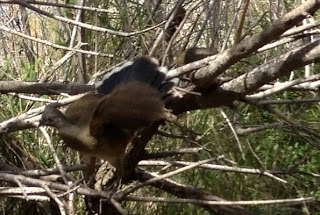 took these pictures as they were flying away from me 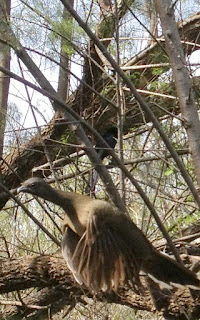 "Unlike most other galliform birds, the brownish-olive Chachalaca prefers to spend much of its time in the trees, earning it the nickname of Mexican Tree Pheasant and allowing it to thrive in tangled brushland resulting from logging or other mechanical habitat manipulation. Chachalaca prefer to run along larger limbs through the treetops or scurry through interior branches while feeding on leaves, berries, and seeds. Birds feed in loose flocks of 4-6 in number and tend to select the ripest fruits available, therefore they are often observed feeding in precarious positions, including upside-down. Chachalaca do not scratch on the ground for food, however they will seek out insects and invertebrates when encountered. Feeding activities are generally concentrated near native food sources. Chachalaca also readily consume feed supplied by humans-preferring cracked corn and milo. Flight is heavy and rarely sustained, but brief bursts can be swift and silent. Plain Chachalaca hens typically lay 3 eggs in flimsy-appearing nests constructed on tree limb forks. Like other galliform species, re-nesting is common if initial nests or broods are destroyed. The precocial young are able to cling to tree branches as soon as they dry and can fly short distances within a week of hatching. Adult birds commonly live 5- 8 years in the wild."

Information from Texas Parks and Wildlife 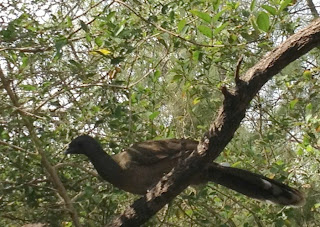 This afternoon, it was my turn to feed the birds at the Visitor's Center. As I was approaching the photo blind, I noticed several Chachalaca's.

They were running around, through the hole in the fence and when I approached, they flew into the trees.

(The feral hogs keep destroying the fence and we keep trying to repair it.) 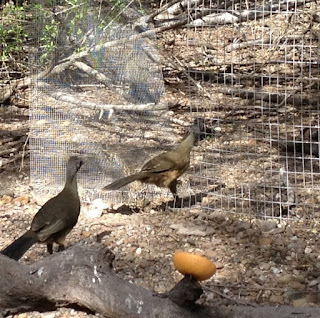 I took several pictures with my iPhone.  I cropped the pictures the best that I could. 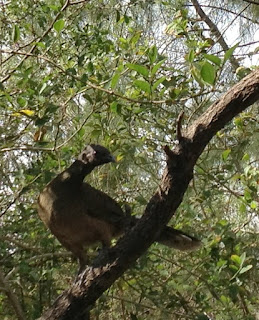 These are not the pretty, colorful birds that I typically see around the Visitors Center, but they are still interesting and they allowed me to get close to them today. 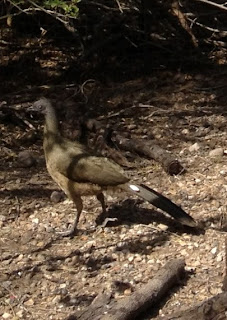 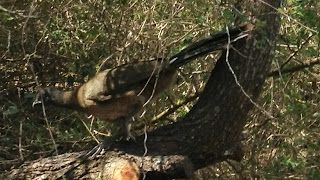 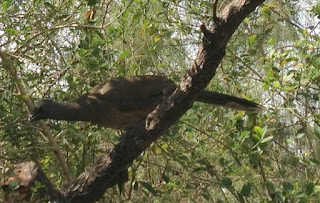