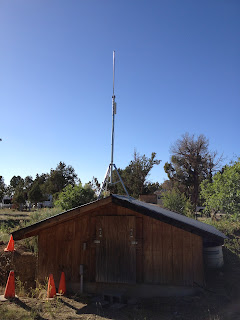 I was never happy to be paying big bucks to have instant access to the internet, but I thought I needed it, so I paid for it.


I purchased the Sprint mobile hotspot in April 2011, the monthly fee is $69.99 per month plus taxes. When I was having problems with the device getting hot and not holding a charge, Sprint's solution was to add $7.00 a month to the plan for a service contract, and they would replace the battery or unit anytime I wanted for free....well, not really free.


I arrived here at Mesa Verde on April 11th, 3 days later, Sprint sent me a text and email - I had used up all of the alloted roaming for the month.  They shut off the roaming so I would not have to pay overage charges and would turn it back on at the beginning of my next billing cycle.


I tried to use the Aramark employee internet with no luck. Being impatient, I called Sprint and told them to turn on the hotspot for my iPhone, the charge is $29.99 a month and WAS unlimited (including unlimited roaming). Less than 2 months later, I am being told that roaming will not be unlimited.


So, I was spending over $100 month for internet, I did not cancel the hotspot because I had a 2 year contract, and figured I would NEED it in October when I leave this job.


I told myself it was ok to pay that much, because I don't have a satellite dish, I don't own a TV and I don't purchase DVD's of music or movies, so this is the only "entertainment" expense I have.


I will be looking for plans without a contract from now on.


I worked this morning because my manager needed the day off. The big boss was working today, he said they updated the employee internet service.  They installed a 2nd antenna - and its close to my RV. I was also given permission to use the internet in the office...off the clock, of course and I can't sit in there all night long...but that's ok. 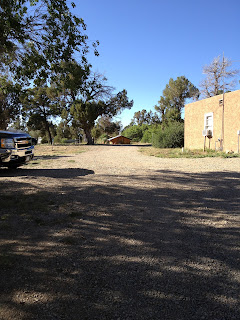 I am using the Aramark employee internet right now and it's just as good as what I was paying for.  I'm sure there will be times that it will be slow or will not work, but I am willing to work around that....to be free of contracts and bad service from the big corporations selling internet service.
picture shows distance from my RV
to the new internet antenna on top
of a small outbuilding


I will cancel all of the internet I am paying for and use the money to buy a mountain bike, I want to ride around here and need something better than my 'beach cruiser' bike.


Being outside, hiking and biking, is more important to me than the internet.


I may find another internet provider at the end of October when I leave here, or I will continue to use "free wi-fi" when and where it is available.


I will keep my iPhone, I have many more phone minutes than I will ever need. And the 3g service works fine to check emails, directions, etc. when I am in a Sprint service area.  I may switch to AT&T or Verizon in November, or I may wait another year when my contract expires. It all depends on how this "free wi-fi" suits me - or if I will feel the need for instant access once again.


Ha ha ha.... the song "Chain of Fools" just came up on Pandora Internet Radio as I was typing this last sentence.


My rant about Sprint cancelling unlimited has had the most views of any of my blog posts.  People searching for ways to get out of their Sprint contracts without a penalty found my post.