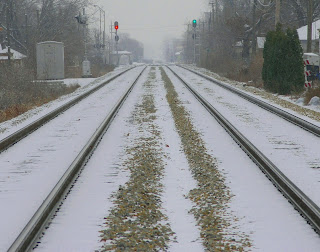 For many years we would travel from Chicago to Denver on Amtrak.  It was the easy, stress-free way to travel to visit our daughter during the winter.  No worries about driving during the snowy, white-out conditions on I-80 or I-70.

Christmas 2006, the Denver Airport was closed down, stranding passengers for days. Parts of I-70, I-80, I-25 and I-76 were closed. Looking out the train windows, we saw abandoned trucks and cars all along the route, but the train made it through to Denver. 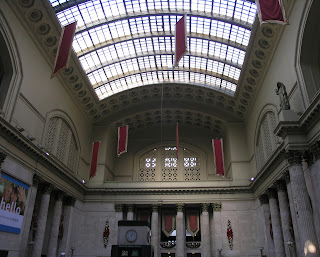 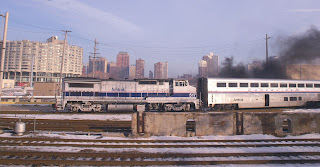 I love traveling on the train, but it is not for everyone. You need to have the time to travel by train, its 15 hours from Chicago to Denver about the same as driving. You have to be able to relax and not worry about schedules or delays. Hopefully, you can sleep through the rocking and rolling, the trains travel faster during the night. Most trains show a movie or two each evening in the Lounge Car. Three meals a day are available in the Dining Car or at the Snack Bar. 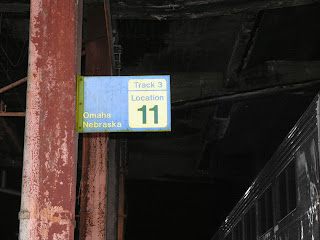 Omaha, NE
more than halfway to Denver
sometime after Midnight 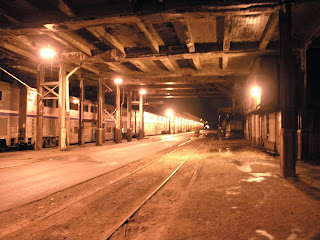 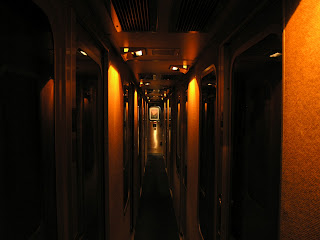 The first long train ride we did was in 1989 from Chicago to Las Vegas. At that time the train station was behind one of the Casinos. Now you have to get off the train in Salt Lake City and take a bus 7.5 hours to Las Vegas.

Between 1999-2009, we rode the California Zephyr between Chicago and Denver more than a dozen times. A few times, for a change of scenery, we would ride on the Southwest Chief, from Chicago to Trinidad, CO or Albuquerque, NM. I actually prefer this route, but it was not as convenient as the California Zephyr into Denver.

In 2001, we rode from Chicago to Washington D.C. and  from there we boarded another train to Orlando, FL.  There was a layover of several hours in D.C. so we toured some of the "Mall" while we were waiting.

In April 2011, when I purchased my RV from a dealer in Seffner, FL, I took this same route from Chicago to Orlando and then rented a car to go pick up the RV.

The train is not a perfect way to travel, the trains and tracks need to be updated, but I hope to still travel occasionally on the train. I'm thinking if I go back to Illinois to visit family and friends I may take the train and leave the RV in storage somewhere. I think it would be cheaper than the cost of fuel and RV sites to travel from the western states to Illinois and back again. I have a lot of Amtrak "miles-points" for free travel, similar to air travel miles and I should use them up before they expire.