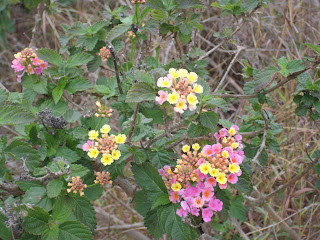 The history of Charlie's Pasture
The Port Aransas Nature Preserve at Charlie's Pasture encompasses 1,217 acres. Charlie Buhan was born on Mustang Island on Sept. 6, 1906.  His father, Matteo Bujan, settled on this island in 1885.  Charlie had a herd of about 250 cattle that ran on the island for many years until the law required cattle to be fenced in.  The land he leased from the State of Texas extended from the current Charlie's Pasture pier to the end of the island at East Flats.  He moved his cattle onto the lease land and built stock pens across from the pier.  Charlie's Pasture was also the place where, as far back as the 1950's, island youngsters hung out or spent many a night camping out under the stars.  Charlie's Pasture is a major part of the local heritage on Mustang Island. In May 2002, the City began an effort to preserve this section of natural habitat, enlisting the talents and ideas of many local residents and area agencies.  The Port Aransas Nature Preserve at Charlie's Pasture is truly a gift for future generations - a sense of history, a study of habitat and an appreciation of nature at its best. 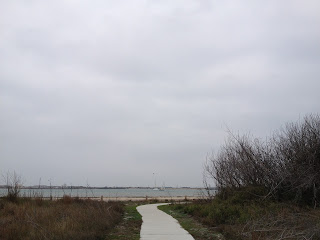 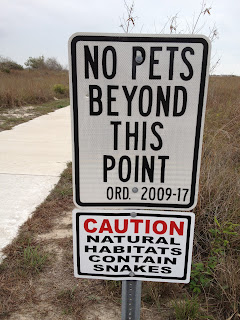 Saturday was a long walking day for me. I started out in the morning at the Community Center Health Fair, picked up a free pedometer from the Walgreen's table. My blood pressure, sugar and oxygen levels all checked out good. Still not happy with my weight or body mass index, but I'm working on that. I read that walking 5,000 steps a day is considered sedentary, you must walk at least 10,000 steps a day to be considered "active". I walked over 13,000 steps on Saturday. 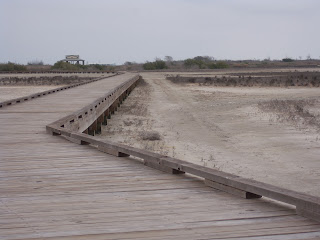 The Nature Preserve is along the Shipping Channel. After I left the health fair, I walked along Port Street and around the fishing docks to get to the preserve. There are several walking and biking paths through the Nature Preserve, some are dirt paths, but mostly you are on boardwalks built over the wetlands area.  The area was very dry with a few ponds here and there. I'm assuming that since I was walking on boardwalks at least a foot above the ground, that there may be times when this area is flooded.  I thought I would have a chance to see a lot of birds in this area, I only saw a few.  It's either too early in the season or it's because of the drought.  After walking over 4 miles, I took a break at a picnic area near the shore and watched the big cargo ships and sailboats.  I still needed to walk back to an area where I could catch the bus back to the RV park.  I walked at least 2 more miles through the Nature Preserve and back through town to the bus stop. 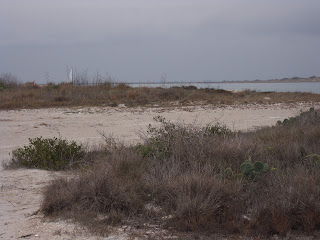 I figure this is a good way to get in shape for hiking. I want to do some hiking in the National Parks. I've applied for Workamping jobs at Mesa Verde National Park and a RV park near Rocky Mountain National Park. I need to meet up with some workamping hiking partners.

Does anyone know of any hiking groups that travel in RV's?
Posted by Teri at 9:04 PM