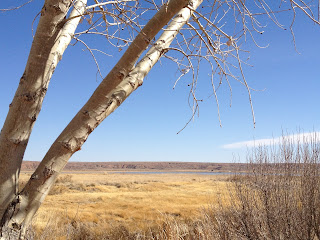 After visiting downtown Roswell, I had a choice of going to the Art Museum or driving out to visit the Bitter Lake National Wildlife Refuge.

I decided to head out to the refuge.  It is 7 miles east of town on a "paved" bumpy road. I was glad I made the decision to visit the refuge. The refuge has "one of the most diverse dragonfly communities on earth". July and August has the peak Dragonfly population and I would like to come back and visit during that time. You can check out www.friendsofbitterlake.com for information on the Annual Dragonfly Festival.

"Like an oasis in the desert, Bitter Lake NWR is one of the most significant wetlands of the Pecos River watershed. Set between the Chihuahuan Desert and short-grass prairies of the Southern Plains, Bitter Lake NWR plays an important role in providing wintering habitat for thousands of lesser sandhill cranes, Ross's geese, and other waterfowl species." 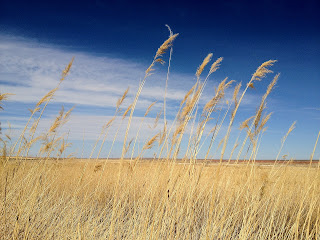 "Bitter Lake NWR acquired it's name from the largest natural body of water on the 24,536 acre refuge.  In the late 1800's ranchers likely named this lake because of the distasteful alkaline waters. High in mineral salts, this natural lake can often exceed twice the salinity level of seawater."

At the end of the road, as I entered the refuge, I immediately felt the calm, peaceful and quiet environment.
I wanted to camp here, but camping is not allowed.  I walked along some of the trails and sat for a long time on the covered shaded porch of the Visitors Center, which is closed on Sunday. 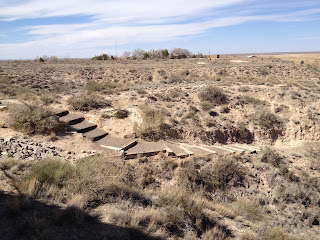 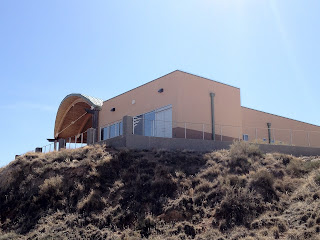 I did not drive out along the 8 mile gravel road.  It was a bumpy road just to get to the refuge and I did not feel like bumping along the gravel road in the motor home. If it had been earlier in the day, I probably would have walked a part of this road.  The first viewing station along the road was only a mile from the start of the auto tour. There is also a 2 mile bike path, but it was very warm and sunny in the middle of the afternoon and I was feeling too lazy to be out in the sun and relaxed in the shade of the porch.

I did not have a reservation for a campground in Roswell and could not stay at the Refuge for too long. I needed to get back to town and decide where I was going to stay for the night.  I drove through a few of the parks in town and was not thrilled with any of the parks.

I found a place to stay that was just as scenic as the refuge.